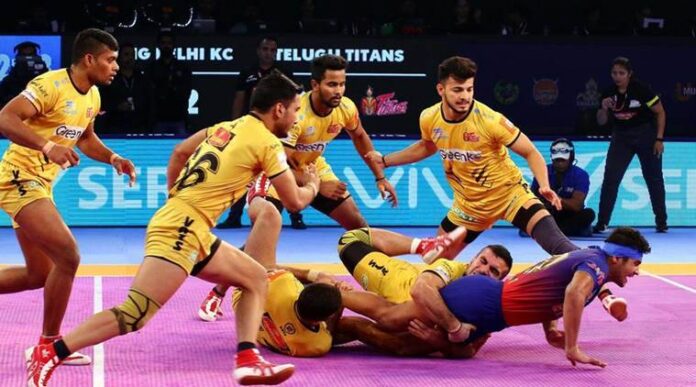 Kabaddi is a popular team sport, which needs skill and muscle power. It has characteristics of wrestling and rugby. It is originated in India 4000 years ago. It is widely played across the Indian subcontinent. Originally it was intended to develop self-defense. It is a simple and inexpensive game and does need a massive playground nor expensive equipment.

How is it played ?

Kabaddi is a sport, where two teams of 7 players play opposite to each other. There are five substitute players on each side making the team size of 12.
In this game two teams are on opposite halves of a small field or court.

How many players in each team ?

They take turns sending raider into the half of opponent who are ready to grab the raider.
Players at the competitive level are usually well-built, strong and also at the same time need to be swift, agile and have high levels of stamina and endurance to be good at all aspects of the game. There is a lot of strategizing which forms part of the gameplay and the players need to be in prime mental and physical condition to successfully participate in a game of kabaddi, else serious injuries may often result.

What are the playing rules?

Raiders win the points. If the raider touches opponent player and returns his own half he will get the point. While returning opposite players will make try to capture the raider by tackling or blocking or pushing out of the court etc. If the defense succeeds in capturing the raider the point goes to defense team.

Which are the Champion Countries ?

This game is popular in the states of India where the culture of playing games on ground prevails such as the state of Maharashtra and Punjab.
Though it was originated in India, it is not the national game of India rather its the National game of Bangladesh. In the year 2020, Pakistan won the Kabaddi World cup beating India. Iran is another Asian country which dominates the game.

What is Pro Kabaddi League?

The Pro Kabaddi League uses a franchise-based model and its first season was held in 2014 with eight teams each of which having paid fees of up to US$250,000 to join as the franchise owners.

This format was conceptualized by an Indian company called Mashal Sports, which was later acquired by the broadcaster – Star Sports. Mashal sports was incorporated by Anand Mahindra, the chairman of Mahindra Group and Charu Sharma, Renowned Indian commentator, compere and quizmaster. It took them a decade to on-board the broadcaster who was keen to understand the subject of Kabaddi.

Which are the League Teams ?

As on 2020, there are at least 12 teams owned by different franchisee owners.
Patna Pirates team is one of the most successful which picked up three titles in last 6 years. Current winner of this format is Bengal Warriers. These teams are named behind different states in India but due to the high level of interest amongst the audience there is significant interest of sponsors and it helps players to make lots of money by playing games.

Who are the promising Kabaddi Players ?

For Example the team owners of Telgu Titans bought Siddharth Desai for a cost of ₹ 14.5 Millions in the year 2019. Pawan Sherawat, who is not the highest paid player, is the most successful raider in the Pro leagues with highest number of points.
Players from Iran dominates the auction in foreign players category, though Pakistan is the current world champion.