Table Tennis is the considered as the national sport, naturally it has the best funding support. Government supports the game. Even if it is not the sole reason, funding is very important for sport development. Only a few world class sports like football, basketball or now Cricket can go full commercial route. Not only top players but second and even third level of Table Tennis players in China have above average financial earning. 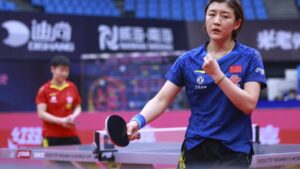 Chinese female players are always dominant basically ever since we started to compete internationally, there’s a period of time they drop off but that’s mostly because of a certain domestic political event, after that they continue to win. In the realm of female table tennis we always have the best players, generation after generation, that alone is an insurance for dominance.

During 80s and early 90s and that is quite a long time, Sweden was the kingdom of table tennis. There were two generation of Chinese players who couldn’t win against Waldner, Persson, Karlsson. To add to this Zoran Primorac from Croatia, Saive Jean-Michel from Belgium, Gatien Jean-Philippe from France, Vladimir Samsonov from Belarus were all legendary players. Korea is arguably better than China in those days.

What’s different now than before?

A big reason is intense training and constant new technique developing, off-court stuff you might say. Chinese people as a group has a reputation of being hard workers, it should not be a surprise we train a lot more harder. The Olympic The World Cup and The World Championship.

He was second to Waldner, he and Kong Linghui started the glorious Chinese era. He was a very talented player back then. His serving ability to this day still considered one the best.

So you can imagine when he became the head coach of national team, he didn’t just do the normal training and analyzing, he went nuclear in details, put huge energy into developing new skill sets and perfecting old ones, sometimes with his coaching staves also with younger players, even learn things from amateur scene, so when players from like say Japan, they just work so hard that they reach a mature level for player, at the same time Chinese players start to play new things that they never even think of, how can they win?

ITTF did try to constrain China, but they have to be fair to everyone including Chinese players, their approaches are rule changing like bigger ball, no block serve, plastic ball, 21 to 11, but think about it, new rules are just as hard for a Chinese player to adapt as a foreign player, and that’s a disaster, for sure, the gap between those two groups actually increased because of this.

All and all, we have best players, best coaches and best techs, and we work the hardest. The only way others can win us is doing a better job. It  is very difficult also needs time. Not looking good if you ask me. I can almost hear other coaches sigh when they try to analyse Ma Long’s game. This is how he is flawless at this point.

Table tennis is a indoor sport takes very little “capital” to set up. It doesn’t require a lot of physical talent to reach a relatively high level. Those make it a people’s sport, I don’t really think China’s dominance will hurt its place in all Olympic sports, but does it hurt the sport itself?  The answer is probably Yes.