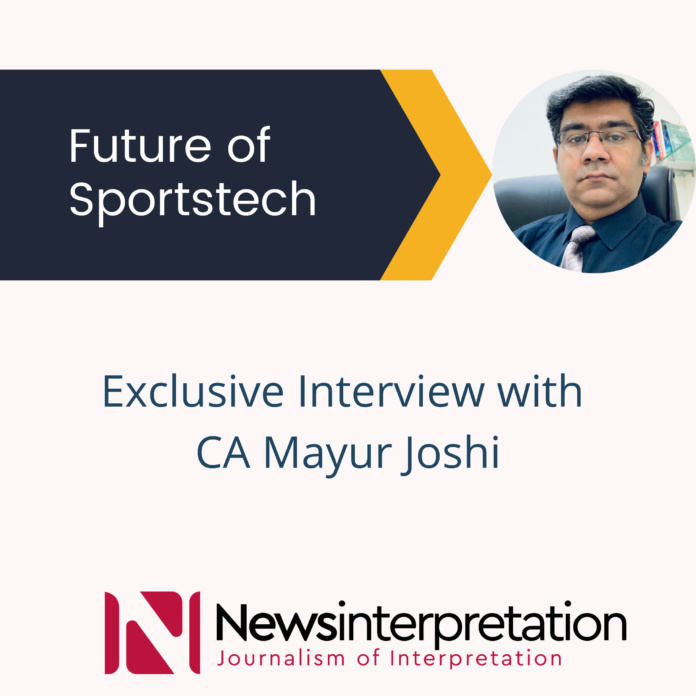 Nazara Technologies is all set to list its shares on the stock markets. Nazara is the first gaming company coming out with an IPO. It has 1,021 android games, which primarily target mass-mobile internet users in emerging markets, including first-time mobile gamers. Monetisation is through periodic, daily, weekly or monthly subscriptions through carrier billing, depending on arrangements with telecom operators.
On the backdrop of IPO we had the opportunity to interview the Indian Sportstech investor Mayur Joshi, a well known and renowned Chartered Accountant focused on Sports tech investments. He is quite bullish on the Nazara technologies. Our team asked him some important questions starting from what is sports-tech to understanding the future of sports-tech. Here is the extract of the discussions on sports-tech.

So what did IPO mean for SportsTech?

A lot actually. IPO of Nazara indicates the indirect entry of sportstech in Stock markets. Nazara’s acquisition of Sports-keeda was one of the important milestones. Sportskeeda was considered as one of the sportstech companies which was valued at the enterprise value of Rs.66 crores.

So how do you define sports-tech?

When we apply technology to simplify the process involved in a sports or administration of sports we typically call it as sports tech. Consider an example of a company which provides cameras in cricket stumps or manufactures RFID stickers for pingpong rackets are all examples of sports-tech. In addition to this there are small businesses which generate sports content are also a part of sports-tech. These are the technologies which reduce the pains involved in the sports, its reporting and administration are termed as sportstech.

How have been the investments in Sports-tech Sector ?

But 2020 has been a truly fascinating year for the Sports-Tech, especially given that most of it was without any live sports. January started strong with over $550 Millions invested in the month but the year came to a crawl as the next seven months brought in less than $1billion

All that changed in September with investments crossing the $1 Billion mark in one single month followed by October contributing another $500m, primarily driven by the Fitness-tech and Football-tech space. Fitbit, Cure.fit are some of the innovative examples of the fitness tech solutions.
The industry gained importance with sports teams and leagues looking for new ways to connect with fans. But there was a wave of investment after the pandemic.

Sports industry has been a very resilient place, Its more recession proof than any other industry. And that’s because its core fundamentals which are based on one simple principle, people are always going to watch and play sports.

Which sub-sector of Sports-tech is promising for you ?

“Sports-tech is a large sector. It consists of different sports from Football to Cricket”, Mayur Joshi explains further. There are different apps from gaming to gambling. Some apps provide facilities to bet on different events in a game like cricket. Bets are placed when a captain wins the toss, player hits a boundry or even on the result of the match.

E-sports, Fantasy sports are also the upcoming sectors in the sports-technology. E-sports is almost a billion dollar industry already. As augmented reality technologies evolve, we see the possibility of creating entirely new sports or we may remove the need for a playing field.

But most investment in the last couple of years has gone into the content creation platforms. The companies which engage their fans, reward fans for their activities are getting the bigger chunk of investments. Zwift, Dream11, Cure.fit, Mobile Premier League are some of the Indian companies that are attracting the investors worldwide.

What is the role of the Blockchain in Sports-tech ?

As we see that content and engagement becomes crucial aspects of the investments in Sports-tech, blockchain based applications would be important to track. In last couple of years, players like David Beckham, Tiger Woods and Russel Wilson have established their presence in content management. In countries like India, the cricketers are god. Viewers like to watch them on and off the field. There are many players who understands the game and like to comment. Video content creation in sports is a massive business. Mayur Joshi further explains that he is working with the small companies which integrate their content platforms with blockchain.

Currently, his team is assessing the proposals which use the innovative monetization methods and think beyond google ad-sense. He sites an example of a company which uses #hive blockchain as the method of monetization. They generate the cricket related video content which gets integrated with the blockchain based platform called #hive. This platform is the community of users and readers.

They vote the content looking at its relevance and quality. Every vote has value. Votes decide the payout for the content. So every post has certain value in the tokens. These tokens derive their value from the underlying currencies such as bitcoin or ethereum. There are other blockchain companies such as Socios, Chilliz which are far more promising as they operate in the football-tech space and engage the fans based on the different activities.

How do you see Indian Sportstech ?

Indian sports-tech sector largely revolves around just two products. First is the app publishers and second is video content creators. The apps like Dream 11 and cure.fit are valued at billions of dollars but more traction is seen in the video content creators. In India, people love to watch cricket. There are lots of sports journalists who lost their jobs in pandemic. They all are trying to create video content and try to monetize on their personal brand. However, it is not that easy to monetize, they have to understand the dynamics of youtube and facebook. They need to be innovative to make money on videos. They need to understand viewers perspectives too. Youtube and Facebook don’t let anyone grow beyond a limit.