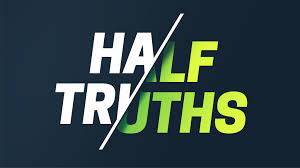 A sailor was working on a ship for 3 years. He got drunk one night. This happened for the first time in 3 years. The Captain recorded this in the register as -The sailor was drunk tonight. The Sailor knew this would have a bad effect on his job. So, he apologized to the Captain & requested him to add, “This happened for the first time in 3 years,” as this was the truth. But the Captain denied & said, “Whatever I have entered is the truth.” After a few days, it was the sailor’s turn to fill the register. He wrote in the register – The Captain was not drunk tonight. It was now the captain’s turn to ask the sailor to change the sentence as it showed that the Captain was drinking every night. The Sailor refused & said, “Whatever I have written is true.” Both the sentences were true but the message that came from both was half truth.

What we Learn here: The first ‘half truth’ about investing is saying ‘I don’t have money to save.’ The truth is you earn enough to save but you are unable to control your expenses & save. Survey data in the US found that 60% of millennials earning over $100,000 a year were living paycheck to paycheck. The answer is simply to save before you spend. The second ‘half truth’ is that most investors say they are ‘long term’ investors. But they look at markets in silos. They buy if the market is going up & exit when the market is falling. Thus the truth is, they are long term investors only in an up cycle. They don’t realise that historically the market has moved both ways & the long term direction has always been up. Regular long term investing across market cycles is the simplest way to create wealth. There are no shortcuts. Just ask those who have stayed invested 20 years & beyond!!

“Unimaginable” or “I’m Conceivable” – A Question of Translation. Story of a coolie.